HERE COME THE VIDEOFREEX starts in 1969. America is undergoing cultural and political revolutions, but you’d never know it by watching TV. Young CBS executive Don West creates a secret project to tell the stories of the counterculture ignored by TV news. He hires a group of young people who have embraced a brand new medium – video. They name themselves the Videofreex and on CBS’s dime, they travel the country in an RV taping footage the networks could never get, including interviews with legendary activist Abbie Hoffman and Black Panther Fred Hampton just months before his murder. The pilot they produce proves to be decades ahead of its time. But when CBS executives see it, they fire the group and say they can keep the “worthless” equipment. The Videofreex decide to stick together, smuggling their videotapes out of CBS offices late one night in a guitar case. 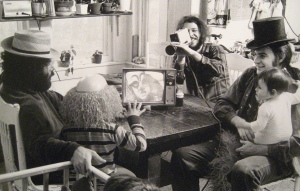 For the next two years, when the Anti-War, Black Power, and Women’s Movements take to the streets, the Videofreex are part of the action, capturing it on tape and hosting weekly screenings in their Soho loft. During this time, the Videofreex truly coalesce as a collective; living and working together, they find their own voices as artists and journalists. And despite the dearth of women behind the camera in mainstream media, the women of the Videofreex are shooting and directing their own pieces from their own point of view, working side by side with their male counterparts – an equality that was rare at the time.

But by 1971, the Videofreex are overloaded by NYC and in need of new inspiration. The entire collective decides to leave the city and move to a sprawling farmhouse in the Catskills. At first, locals are wary of the Videofreex, who they see as a hippie commune. But the Videofreex win over the community when they build a transmitter and illegally create the country’s first pirate TV station. Channel 3 Lanesville is made for and stars the local people of Lanesville, NY. With news coverage, children’s programming, and call-in shows, it’s the only on-air entertainment for this valley community that gets no TV reception, and it’s hugely popular. It stays on the air throughout the 1970s, becoming a model for Public Access TV, and creating a legacy of radical, homegrown media.